The 1845 Pattern Infantry Officer’s Sword has a “Gothic” style pierced hilt, so-called after its resemblance to the shapes of windows in Gothic architecture, and the “s-shaped” folding guard.


Royal cipher for Victoria Regina (reigning from 1838 to 1901) placed within an oval hilt cartouche, very similar to the 1822 pattern.
The revolver will become soon the primary weapon choice for the Officers.


Brass scabbard with two suspension rings.
Grip in grey fish skin.
The brass hilt has a folding guard for a better confort.

Slightly curved and double-edged blade engraved on the full length with military and folia attributes.
It comes from Silver & Co, 67 Cornhill, London. 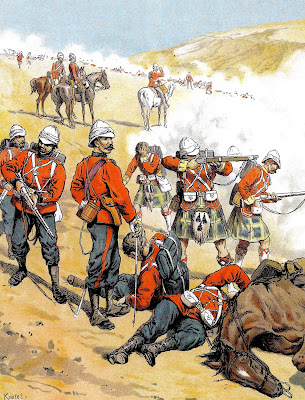 This is the sword of all Infantry Officers during the Crimean war, the Zulu war and Boers war, wearing proudly their Red Coat...the 1845/1822 pattern will be used until the end of the XIX e century. 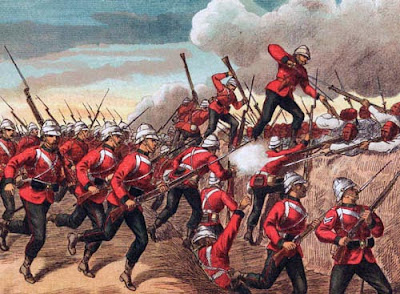 As a fighting weapon, the 1822/1845 Pattern was rather unsatisfactory, the blade being far too weak and the hilt bars affording little protection. The revolver anyway was the primary weapon for an officer.

When the 1845 Pattern blade was introduced, officers were not required to immediately change to the new pattern.  They were allowed to carry the old pipe back sword blade until it became unserviceable