This sword pattern was also attributed to the Dragoons of the Imperial Guard and the Elite Gendarmerie of the Guard.
A magnificent unit on dark tall horses and bearskins.

One the most beautiful and famous sword from the Napoleonic period.

This saber is full of emotion and glory, the blade has heavy signs of combat wears.

The copper scabbard, of the third pattern, has spurs wears from the Peninsula war, the Russian campaign or Waterloo .

Dated from June 1811, month of the baptism of the king of Rome, Napoleon's son and retreat from Portugal by Wellington.

Copper hilt with three branches with a Grenade and  marked VERSAILLES and the "B" for Nicolas Boutet, the famous Emperor sword and pistols manufacturer and designer. 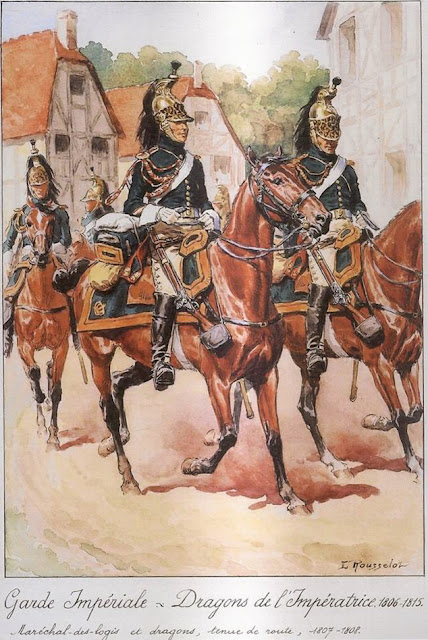 The Grenadiers performed admirably at Austerlitz, where they defeated the Russian Guard Cavalry.

baptism year of the king of Rome, Napoleon' son and retreat from Portugal by Wellington. 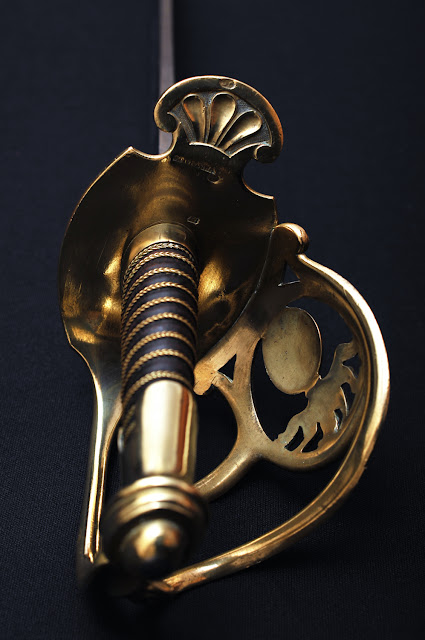 The Horse Grenadiers became known for their austerity and haughty demeanor. The army troopers did not like them, too well payed or too arrogant, they nicknamed them "The Giants", "The Gods" or simply "The High Heels".

The Horse Grenadiers were very devoted to the Emperor. In March 1814, a Major of grenadiers was wounded at Craonne. He had his foot carried away by a cannon-ball and the surgeon had to amputate his leg.

During the extremely painful operation which he bore with great courage, the man called out "Vive l'Empereur!" and lost consciousness.In the very end of the battle of Waterloo, when the entire French army fell apart before the Prussians and German-British-Dutch army, the horse grenadiers made a great impression on the pursuers...

Cpt. Barton of the 12th Light Dragoons recalled how his regiment advanced against the giants on black horses:

"The grenadiers "appeared to take but little notice of our advance, when opposite their flank they fired a few pistol or carbine shots. We were ... being too weak to make an impression on them...they literally walked from the field in a most majestic manner." 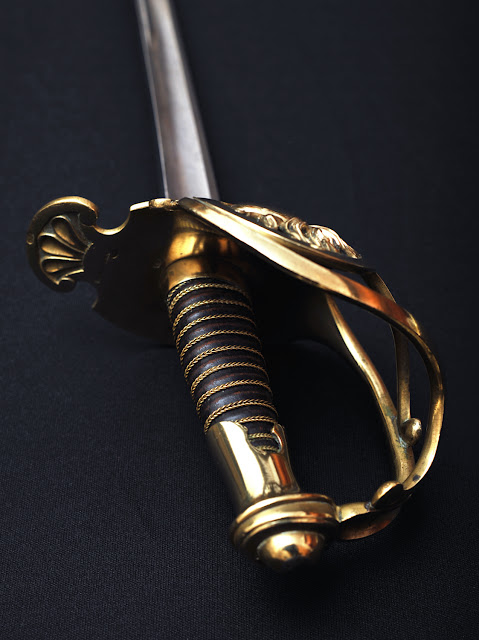 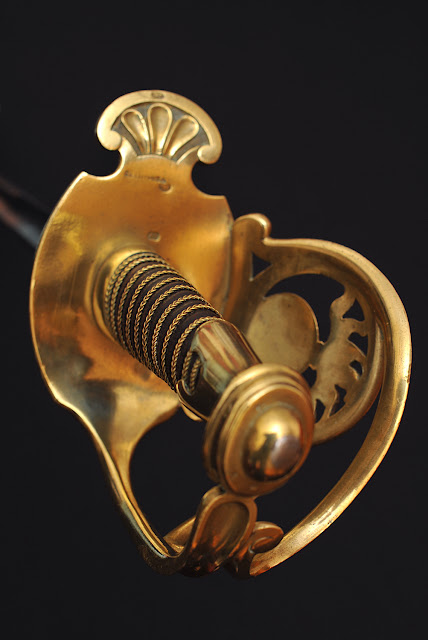 Nicolas Boutet stamp, he was one of the best and more artistic French gunsmith and director of the Versailles rifle manufactory.

The Guard Horse Grenadiers and the Polish Guard Lancers were the only two cavalry regiments of Napoleon's Guard never defeated by enemy's cavalry in combat until Waterloo.

The other cavalry regiments suffered only few defeats for the ten years of almost constant campaigning and numerous combats. In each case they were outnumbered by the enemy, and on one occassion they were ambushed.
In November 1815 the regiment was disbanded.
It was the last unit of the whole Imperial Guard disbanded by the Bourbons.

The Imperial Guard was no more 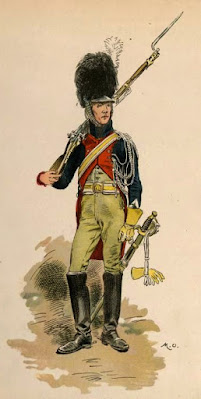 The Gendarmes d'élite de la Garde impériale was a gendarmerie unit formed in 1801 by Napoleon as part of the Consular Guard which became the Imperial Guard in 1804.

Their role was to protect official residences and palaces and to provide security to important political figures.

In war, their role was to protect the Imperial headquarters, to escort prisoners and occasionally to enforce the law and limit civil disorder in conquered cities.

The Gendarmes d'élite were nicknamed "The Immortals" because, as a military police, they were less engaged in combat than other units and had less personnel killed in action. However,  they fought bravely and earned several battle honours in Spain and during the Russian campaign at the Berezina crossing.

The unit was in 1815 during the Second Restoration. 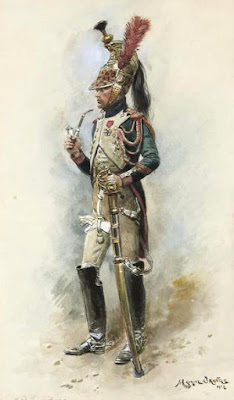 The Dragons de la Garde impériale (Dragoons of the Imperial Guard) was a heavy cavalry unit formed by Napoleon I through the decree of April 15, 1806.

The "dragoon" regiments of the line had distinguished themselves in the German Campaign of 1805 especially at Austerlitz, and therefore Napoleon decided to reorganize the cavalry of the Guard and create within it a regiment of dragoon guards.

This regiment was also known as the Dragons de l'Impératrice (Empress' Dragoons), in honour of Empress Joséphine. Following the Bourbon

Disbanded after the second Restoration, they were reformed during the Second Empire.

They ended with Marshal Ney's charging the British square at Waterloo.