Hussar NCO's Sabre Model 1777 known as 1786, Republican Version used from the French Revolution to Napoleon Empire
The manufacturing of these swords or variants will extend from 1792 to 1802 (AN XI).
This Hussar sabre with a single branch hilt is part of a serie, started in 1750, followed by the model of 1767, 1777, 1786 and which will end with the models of the year IV, then will appear, for the light cavalry, the famous "à la Chasseur" swords an IX and an XI.
( Check our An XI model on the website)
The blade of this sabre testifies to the multiple campaigns in which it had to participate across Europe...up to Moscow.
Brass frame, guard with a single right-angled branch, cap with a long tail said to be in the shape of a spoon. It is marked with the Rooster mark, French new republic state mark for the swords from 1793 to 1799 (the rooster as a symbol comes from the Latin Gallus meaning rooster and Gaulle ... the rooster becomes the symbol of France)
Wooden handle sheathed with a calf sheepskin boiled then glued and tinted with walnut stain, without metallic spirals (Hungarian tradition ). You can see the string under the sheepskin that surrounds the spindle of wood, certainly beech. The hole in the handle, for the passage of the strap disappeared on these models during the Revolution.
On these sabres, the leather sheaths the rocket and goes up horizontally under the elongated pommel (on our the leather suffered a bit), a style that will disappear with the  First Empire post 1804. 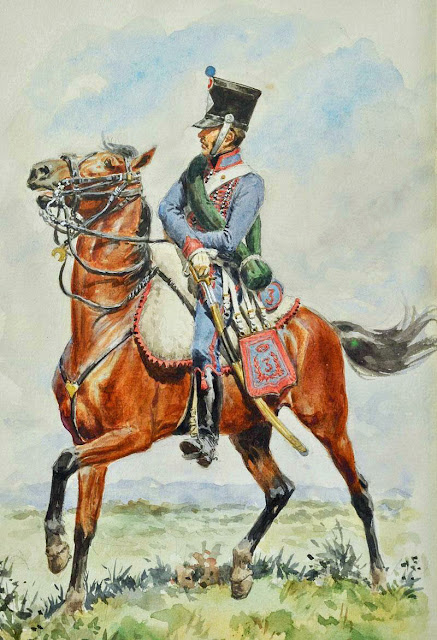 One simple bar hilt with two rectangles strips or mumps to secure the sword with the scabbard.

Curved blade with flat back, counter-cutting edge and hollow sides, without any mark on the back fuller, stamped with the "lictor" state mark with the Phrygian cap (the lictor bundles are a very present symbol in the 1789 revolution), state mark for weapons during the revolutionary period from 1793 to 1799.

The saber weighs 0.870 kg and 1.4 kg with scabbard, so it is less heavy than a year XI sabre ( see the AN XI saber from our collection )

It is better balanced than the following pattern for the light cavalry AN XI, it is as effective as the saber of the English Light Cavalry, the 1796 Pattern (see that of our collection) .
We understand why he had such a long life on the battlefields.
You find this saber in the hands of one of the heroes of Arturo Perez-Reverte's novel 'Le Hussard " and in tthe hands of the officers in the Ridley Scott movie "The Duellists"
Leather-covered wooden barrel scabbard, reinforced with molded splints, held in place by two large brass fittings,  which serve as belière bracelets, and a thin asymmetrical round brass dart ending, (the initial model of 1777, the iron stinger or dart only covered the rear part of the scabbard, then the dart completely surrounds the scabbard tip as in our version).
It has indented trim in semi-circles, typical of the consulate, highlighted with an engraved thread, probably for a non-commissioned officer.
It precedes the future evolution of the saber created by Nicolas Boutet for the Horse Chasseur of the Imperial Guard 1802.
The famous pattern so much sought after and copied by counterfeiters in the 1830s.
It has kept the so-called "forage" leather cord from its former owner.
Hussar sabres have changed little since the 1752 pattern prior to the French Revolution, however they have lost the eyelet under the cap which allowed the hilt knot to pass through.
During the turmoil period of the French Revolution, the manufacturing of weapons will be disrupted, so for lack of copper models of the year IV or IX did have iron scabbards.
So in 1793 in the factories of Klingenthal, work was almost stopped, the first controller, Jacques Mouton, took over the factory to meet the demands of the State, which was looking for a higher quality of manufacturing and an increase in quantities.
From 1793 to 1798, the Klingenthal factories marked the brass hilt of the enlisted men with the control  rooster mark and the lictor beam for the blades approval.
The French revolution will work with up to 380 suppliers, requisitioned or not by the Committee of Public Safety(his committee formed the provisional government in France, led mainly by Maximilien Robespierre, during the Reign of Terror) to supply the weapons of the conscripts of the Revolutionary Armies.
It is the sword of the Hussars of Valmy , Lodi , Arcole , Rivoli, of the campaign of Egypt , Marengo , Austerlitz...you will find it in the hands of the Chasseurs à Cheval de la Garde des Consuls (with however a better quality brass) during their exploits at the Battle of Marengo, in June 1800.
At Marengo battle, 800 against several thousand, the Chasseurs à Cheval de la Garde des Consuls held out for five hours, giving time for General Desaix's troops to arrive on the battlefield.
The Garde des Consuls will get the brand new Boutet's famous saber in 1802 and all of the French light cavalry will be equipped with the Chasseur sabers of the year IX and then Year XI. 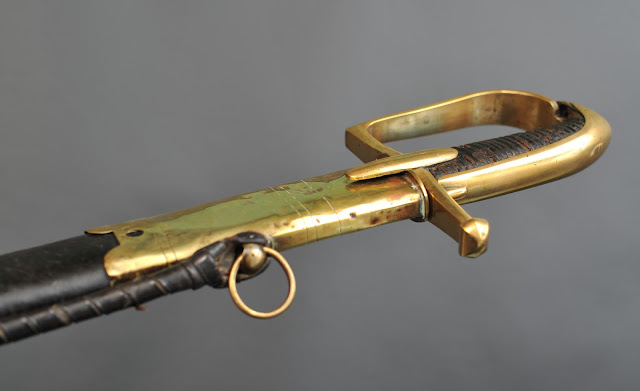 Recruited in Hungary then in Germany, and integrated into the French army since Louis XIV, the hussars uniform and were magnificent and will remain strongly attached to their traditions.
So many will remain faithful to this sword pattern....a few until 1812 ... the Russian campaign will do the rest...
In 1801, even the horse hunters of the consular guard adopted the dashing uniform of the hussars with dolman and pelisse. 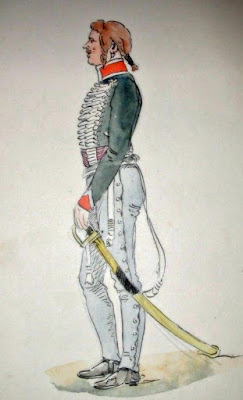 This last deserves some explanation, it is often confused with the fodder rope which was tied around the shoulders of the first hussars.
It is confused with the fodder rope, 5 meters rope with an iron ring, given as an endowment with the oat bag for each cavalry trooper since the dawn of time, since it was already part of the package of the troops of the Roman Empire.
Many of the accessories of the hussars come from objects diverted over time from their primary function, such as the sabretache, the dolman, etc.
In my humble opinion (the debate remains open) the functions of this leather cord could be as follows:
- Emergency leather cord to replace sword knot, broken bridle, or allow tourniquet when wounded, etc.
- But above all, the complicated and durable way to tie this leather cord around the bail rings, shows that they were trying to achieve a better bounding between the copper, the wood and leather parts of the scabbard.
This was to reinforce scabbards of fragile design, subjected to severe test on the battlefield for almost twenty years without interruption.
So on our sabre, the cord has been tied from each bail hook ( pitons de belieres) and not on to the rings.
We never find this type of leather cord on the sabers which will replace the sabers of the Hussars, such as the AN IX and AN XI sabers which have sheet iron scabbards, so with a much stronger scabbard.
The tip of the scabbard, in the shape of an asymmetric lyre, does not show any major wear on our saber. Some think that advanced wear of the tip is a sign of authenticity, the term "saber dragger" is more to be taken figuratively than literally.
The trooper had to pay for repairs on his sword, so dragging the weapon on the pavement must not have been a habit.
This saber by its extended battlefield life, through the First French Republic, under the Directory, Consulate and First Empire, is one of the most endearing combat sabres in a collection, because it wrote among the greatest parts of the Napoleonic adventure.

It is also the saber carried by the Regiment 7 Th Bis  Hussar, a prestigious witness of the Egyptian campaign from 1798 to 1801.
It did equipped the Dromedary Regiment, even if they will prefer to use a oriental Mameluke saber (see the one in our collection)
On January 6, 1799, Bonaparte returned to Cairo three days later published a decree stipulating the creation of the Dromedary Regiment.
For the Egyptian campaign, the French army of 3000 cavalry cavalry was embarked without mounts.
They only take their saddlery with them. The artillery squadrons were reduced to a minimum in terms of the number of mounts, not even sufficient to ensure the unloading of parts and caissons.
Before leaving France for Egypt, Bonaparte wrote to the Directory that they will capture up to 10,000 to 12,000 very good arab horses.
It was a serious mistake, the Mamluks and Arabs will not give up their horses so easily without fighting. 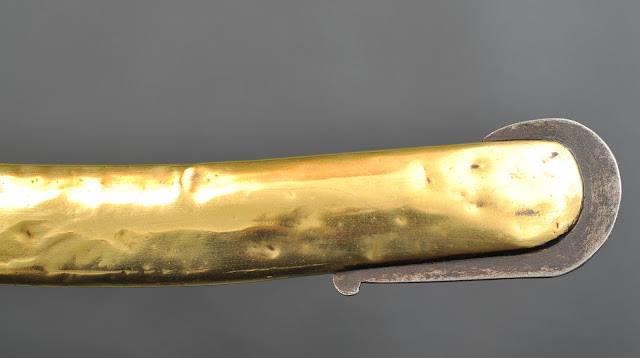 It is therefore on foot that the Chasseurs, hussars (7th Bis Regiment of Hussars) and dragoons will reach Cairo from Alexandria, carrying their equestrian equipment on their backs, anyway the saddles were too wide for the narrower backs of Arabian horses.
Desaix wrote to Bonaparte "I must get rid of the Mameluks, but my General, you know that success is very difficult without the use of cavalry". 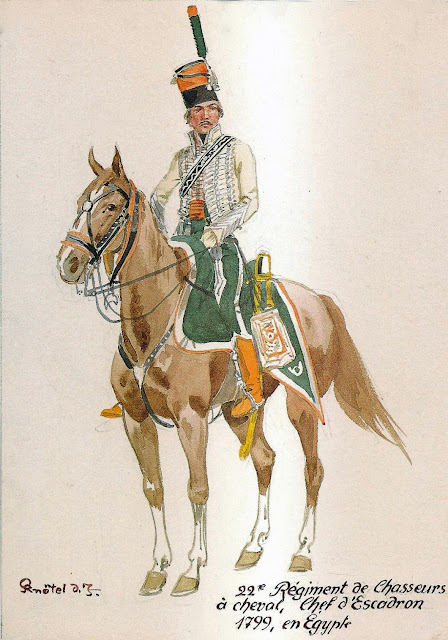 So Bonaparte decides the organization of a corps of Regiment of Dromedaries, a mix between infantry and the cavalry,  the speed of the animals will help to carry messages in a record time.
Mainly infantry but also cavalry trooper without horses will be incorporated into its ranks.
They will be equipped with a bayonet rifle, a lance (at least initially) and the saber that we present here.

What a story to say to his grand children... a conscript soldier of the new Republic, coming from a French countryside county, enlisted in a regiment of Hussars who came to fight and discovered the hieroglyphics of Carnac and learnt to fight from a dromedary under a terrible desert heat. 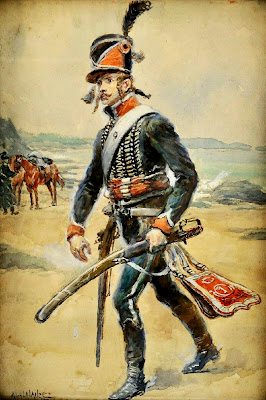 Thanks:
A big thank you and tribute to all the illustrators and painters:
Rousselot, Begnini, Knötel, Telenik, Yejov, Orange, Meissonier, Gericault, Detaille, Leroux, Collingwood, Vernet, Gros, Conrad, Ganier Tanconville, Toussaint and many others ... who bring colours to the website