Wonderful sword of a Light Infantry Officer of the 33 Th regiment of the Napoléon Grande Armée circa 1810.

Light Regiments ranked as senior to the Line Infantry and regarded themselves as such, an attitude of superiority reinforced by their more impressive uniforms and for this particular officer, with his beautiful sword.

The hilt has been inspired by the "Presentation swords" given by Bonaparte as a Consul and designed by Nicolas Boutet, prior to the creation of the Legion d'Honneur.

The first validated supercentenarian soldier ever recorded, was a Dutchman born on 21 September 1788 and who died on 3 February 1899 at age 110 years, 135 days, he was a drummer at the 33th Light Regiment.

Traditionally light infantry were soldiers whose job was to provide a skirmishing screen ahead of the main body of infantry, harassing and delaying the enemy advance.

Light infantry was distinct from medium, heavy or line infantry. Often officers skirmishing ahead were protecting themselves with a curve sword.

The gilded bronze  hilt has a single branch finishing near the pommel with a "tear".
The pommel forms an unusual rectangle. The sword has two large languets with a palm design.

The grip is in ebony type wood.

The hilt is very different from the ones usually carried by Infantry officers, such as the 1800 pattern sword. (check the one from the collection)

Our hilt sword has been inspired by the Presentation swords given by Bonaparte as a Consul and designed by Nicolas Boutet.

The hilt design is shared with the briquet from the Grenadier of the Imperial Guard.

Our sword is mentionned in the book of Jean Lhoste and Jean-Jacques Buigne "Armes blanches : symbolisme, inscriptions, marquages, fourbisseurs, manufactures"

The blade is 75 cm long slightly curved, engraved on one side " 33ème REGIMENT I……...EGER " and on the other side engraved with folia and military attributes...

The blade remains very sharpened with some gilt and blue designs remaining at the ricasso.

Leather black scabbard with a large copper chape and bouterolle.


In fact the distinction between French Light and Line infantry was minimal, mainly one of dress and nomenclature.

Both Light and Line infantry were trained and equipped in the same way with a better designed blue uniform for the Leger.
They were often employed not just as skirmishers, but also as close order troops.

French Line infantry were also capable of skirmishing, however, it is unclear whether the raw recruits of the Line infantry during the 1813-1815 period would have been well-trained enough to have been deployed as skirmishers.

Beginning of 1808, the Grande Armée was in trouble in Portugal, trying to reinforce the blocus against England.

Also Napoléon did create two new brigades of Infantry, using men from the depot, the 27 th Light Infantry...they will create the 8 th Regiment, then a 33 th and 34 th Light Infantry will be created.

In September 1808 after the treaty of Cintra, France left Portugal.

After the battle of  Baïlen, the 8 Th will join the 33 Th Light Infantry to be  disbanded in 1809. Some of them will join the Guard of King Joseph, Napoléon brother, in Spain.

Napoléon annexing the Deutch in 1810, the even line Deutch regiments will form the 123 Th, 124 Th 125 Th, and 126th and the I st Jagers (light Infantry) with the 1st Battalion of the 6 th Line Infantry will form the new 33 Th Light Infantry Regiment.

Then, they will march to Moscow, during the Russian Retreat...At the battle of Krasnoi, the 17 th of November1812, Napoléon decided to get out of Krasnoe and organised himself the action using the Imperial Guard...then he went back... the 33th of Light Infantry and the 8th of Line was the arriere- garde...the 8th manage to retreat ...but the 33th was under heavy artillery fire then was charged by the cavalry.

His colonel, the Colonel de Marguerye was wounded with a bullet in his jaw and a deep sword cut...but did not surrender to the russian general...he was made prisoner and will return to France in August 1814.

Novice in August 11, 1799 on the ships the l'Entreprenant and Duquesne, volunteer at the 5th regiment of dragoons on December 16, 1800, employed at the observation corps of the Guard in 1801, brigadier on October 25, 1801, sergeant on 21 May 1802, second lieutenant on February 27, 1804, took part in the
campaign of the Grand Army in 1805, entered the service of Holland, became lieutenant in the cavalry of the Royal Guard, aide-de-camp of the King of Holland on July 7 1806, captain on November 22, 1806, squadron leader on August 24, 1807, major of the 2nd regiment of cuirassiers on December 17, 1807, colonel on April 3, 1809, campaigned against the army of Brabant after the landing of the English at Walcheren, colonel of the 2nd regiment of cuirassiers on October 1st, 1809, is assigned to the general staff on May 12th, 1810, returns in the French army after the annexation of Holland to French Empire, orders provisionally the regiment of light infantry on the 6th August 1810, incorporated with the 1st Battalion of the 6th Dutch Infantry Regiment to form the 33rd Light Infantry Regiment on August 18, 1810, participated in the Russian Campaign in 1812, wounded at the Battle of Krasnoi on November 17, 1812 , taken prisoner of war by the Russians, returned from captivity on August 10, 1814, is appointed colonel of the 80th regiment of infantry of the line on October 4, 1814, is replaced in his functions to the Hundred Days and admitted to the reform treatment the 19 April 1815, adjutant commanding May 29, 1815, becomes chief of staff of General GAZAN, commander-in-chief of the defense of the Somme June 7, 1815, colonel of the departmental Legion of Tarn August 16, 1815, that of the Aveyron on March 31, 1819, colonel of the 3rd infantry regiment of line on November 17, 1820, marshal of camp April 25, 1821, general inspector of infantry for 1822 in the 10th military division, commands a brigade of the 2nd d ivision of the 1st Corps of the Pyrenees Army on February 12, 1823, took part in the Spanish Expedition in 1823, Inspector General of Infantry for 1825 in the 7th and 9th Military Divisions, for 1827 in the 10th, 12th and 20th military divisions, for 1829 in the 8th and 9th military divisions.

During the battle, the regiment will be destroyed, solely 77 men out of 2200 will come back and cross the Berezina. 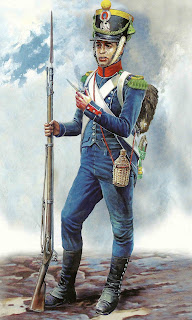 Recreated in mars 1813, the regiment will be in Hamburg and Mäesrtich with the colonel Le Baillif  as a commanding officer under Marshall  Davout.


The Battle of Krasnoi from the 15 th to the 18 th of November 1812  was a series of skirmishes fought in the final stage of Napoleon's retreat from Moscow. This encounter was noteworthy because of the heavy losses inflicted on the remnants of the Grande Armée by the Russians under General Mikhail Illarionovich Kutuzov.

Lacking sufficient artillery, cavalry and supplies to wage battle, Napoleon's object at Krasnoi was to collect his scattered troops and to resume his retreat. Despite the vast superiority of his forces, Kutusov refrained from launching a full-scale offensive during the four days of fighting.

The climax of the engagement occurred on November 17, when an aggressive feint by the French Imperial Guard induced Kutusov to delay a potentially decisive final Russian attack.

Napoleon was able to withdraw part of his army before the Russians seized Krasnoi.

Despite Napoleon's success in saving part of his army from destruction at Krasnoi, overall the encounter was ruinous to the French.

During the four days of combat Napoleon's subordinate commanders suffered heavy defeats in individual actions, and large numbers of French stragglers were captured by the Russians.

The Grande Armée was also compelled to abandon much of its remaining artillery and baggage train.

Geert Adriaans Boomgaard, the first validated supercentenarian ever recorded, was a Dutchman born on 21 September 1788 and who died on 3 February 1899 at age 110 years, 135 days, he was a drummer at the 33ème Régiment Léger.